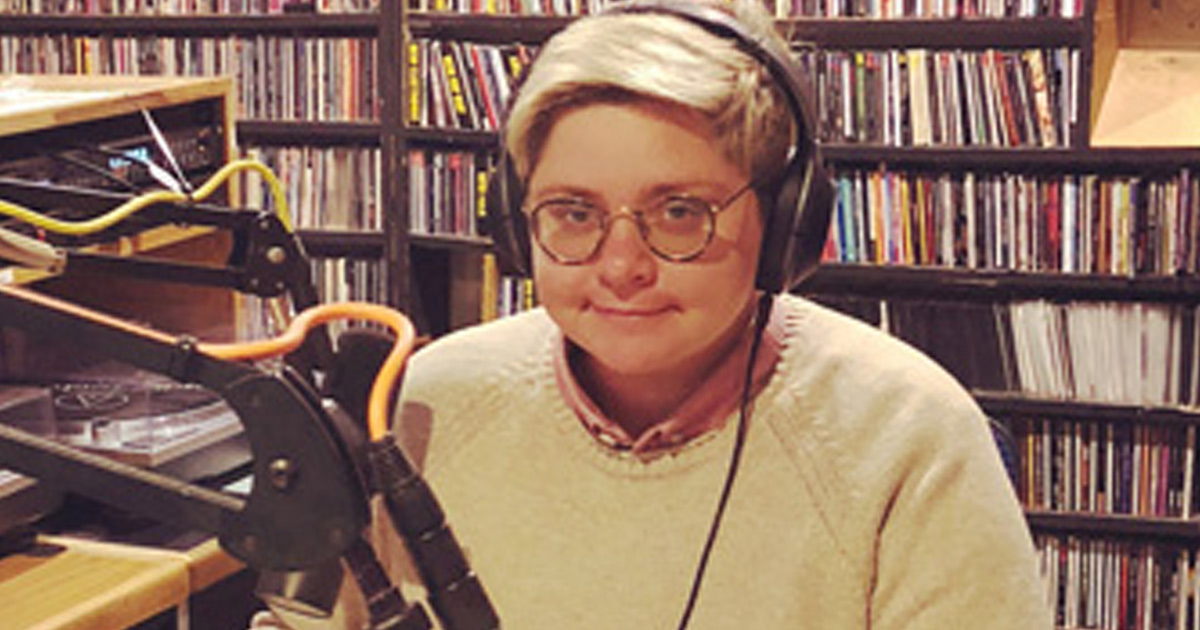 Tell us how your show came about.
Honestly, after the 2016 election, I found myself feeling the need for some way, other than yelling into Facebook void, to connect with people. I grew up between Wyoming and South Carolina, and I went to college in D.C., so I have sort of a unique set of political views and I’m friends with many people from all sides of the political spectrum. I think that connecting and realizing how much we all have in common is the most important thing we can be doing now. After studying literature, I am keenly aware of how well various artforms can create an avenue for objective conversations about difficult topics, and I wanted a platform to explore these sometimes taboo topics and create a space for constructive conversations.

I like the title: Humanities for Humanity. At what point did you have the title of your show?
Thank you! The title actually took me a super long time, because I wanted something that would enable me to cover as many topics as possible without being too pigeonholed into a certain area. I don’t think I had my title until the pressure was on and I was recording my demo.

Let’s back up a bit. How did you learn of KUCI?
I am not actually sure – I had a friend way back when I was in my early 20s who DJed, so I guess I’ve known about it for about the last 10 years, but I did not know that I, as a community member, could apply for a show until last spring. I was working in marketing and not feeling very creatively fulfilled, so it dawned on me during an acupuncture session that I should check out radio as a medium. I e-mailed Kevin – and, to my great surprise, a week after quitting my marketing job, I got the e-mail about KUCI training, and I’m so lucky to have had the past 6 months or so to focus on my writing and trying out radio as an alternative medium.

Anything surprising about the training you underwent at KUCI?
I immediately loved the community and felt like I had found people who had similar interest, which I was sort of convinced did not exist in Orange County.

Do you have a favorite show of your own thus far?
No, but I will say that I started my show with the idea of having a soapbox, but what I have really learned is the art of listening and how impressive and passionate so many of our peers really are – we just need to start taking the time to look, and most importantly – ask!

How about KUCI in general…any shows you make it a point to listen to?
I love my show neighbors and am sure to always catch their shows! Otherwise, as long as I’m in range, KUCI is what is playing in my car.

And if you’re out of KUCI range, what do you listen to?
Either Crooked Media podcasts (Lovett or Leave it & Pod Save America) or Wilco CDs.

What moved you to do a PA show rather than a music show?
Initially, I was toying with the idea of starting a podcast and thought this would be a good way to break into that; however, I’ve found that more than anything my show has led me back to my roots of writing poetry. But, I love having a space to shine the spotlight on other people’s incredible work, so that motivates me to keep on with the show.

Plans for upcoming shows?
One of my good friends just published an amazing YA novel, and she is from Orange County, as well, so I am really excited to have her on. I also am covering an exciting event at the Bower’s museum about Native American art, which is another area that I’m very passionate about.

Who would be your dream guest?
I would love to have someone on from a big art auction house who was willing to talk about the corruption and borderline money laundering that happens in the artworld, as well as someone who was willing to talk about how terrible Jeff Koons’s “art” is. Or, more optimistically, I would love to have Tracy K. Smith on – she’s one of my all time favorite poets.

Any surprises about KUCI in general?
I love how tightknit the sense of community is!

What would we find on your nightstand?
My glasses, ice water, and my phone/charger.

In your fridge?
Currently, my Blue Apron box!

Words to live by?
“And, yet…” I have found that no matter what you think of any given circumstance, until you live it, you don’t really know anything about it. So, the phrase “and, yet” has a lot of meaning to me.