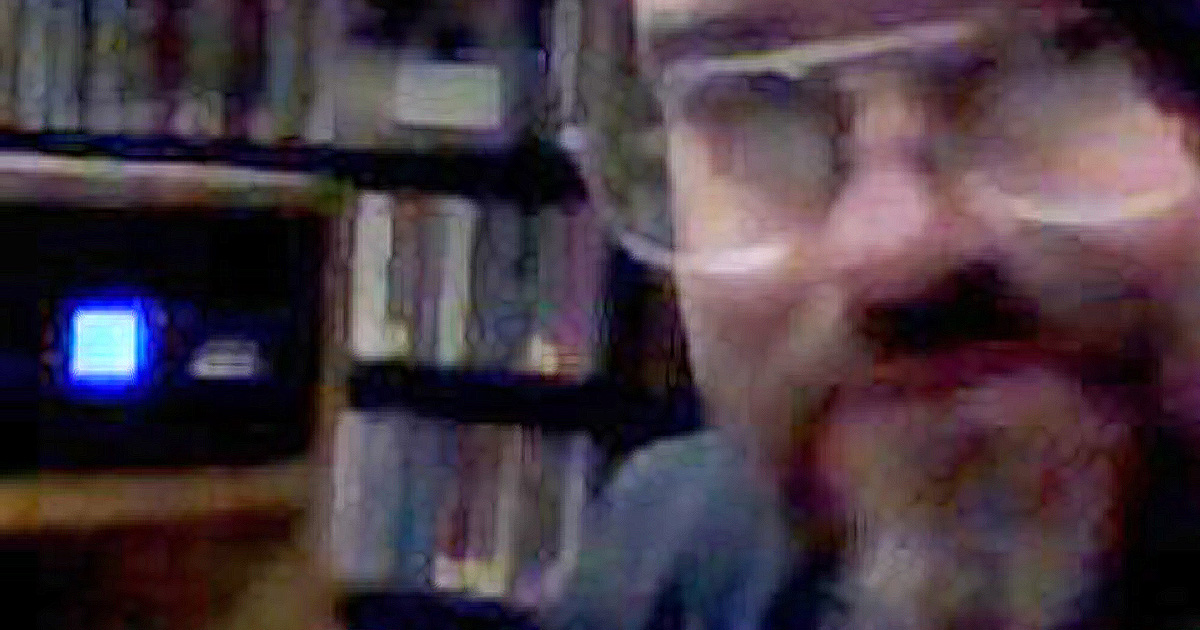 Tell us about your Sunday afternoon radio show, The Darkling Eclectica , which airs from 4-6 p.m. PT.
When I arrived at UCI as a student in 1983, I had no idea what I wanted to major in and even less of an idea what I wanted to do with my life. The one and only thing I was absolutely certain about was getting a show on the campus radio station. I’d spent many a Friday night during my high school days listening to “Hour 25,” a radio show on KPFK dedicated to science-fiction and fantasy, and I was especially impressed by the story readings the host Mike Hodel would occasionally do.

So my goal was to create opportunities for me to employ various silly voices, and that’s still the heart of the show: me reading stories or performing semi-improvised comedy melodramas with the Month of Sundays Players or presenting old radio shows. Oh, yeah, and there’s all sorts of music, too.

How did you find your way to KUCI? When was that?
The first time I ever heard of KUCI, I think, was an article in the L.A. Times in 1981 when KCRW’s power increase forced KUCI to move from 89.9FM to 88.9FM. My only thought at the time was happiness that I’d be able to to listen to KCRW more easily — they were airing the original “Hitchhiker’s Guide to the Galaxy” radio series back then as well as other shows from BBC Radio and ZBS Media.

When I actually decided to attend UCI two years later, though, remembering the radio station, I found out when the training classes were going on, and the rest is history.

How did you come up with the name?
The show started on Friday mornings from 3 till 6, moved a few months later to 3 to 6AM on Sundays, then settled at last into the Saturday morning from 6 till 9 timeslot where it stayed for more than 20 years. So I always saw the show as an exercise in moving from darkness into light.  Hence the term “darkling” And the eclectica part is ’cause I can never manage to play just one type of music.

Then, when I moved to Sunday afternoons a couple years back, well, I was just too lazy to change the name.

You’ve had this show for quite a while — how long, exactly?
The first show was in mid-February of 1984, and the one this last Sunday was Episode 1498. So if I do one episode a week and if the average year has 52 weeks, my pocket calculator tells me it’s been 28.807692 years.

What do you attribute its longevity to?
It’s quite simple, I’ll often say: I just keep applying for the show, and the station management just keeps giving it to me. But I suppose I’ll have to admit that there’s more to it than that.

See, I’m a very habitual person. Once I start doing something, I find it very difficult to stop, which is why I so seldom do anything at all, now that I think about it. I’ve worked at the same four part-time jobs for the past quarter century, for instance, and I’m one of the four finalists in a Monday through Friday webcomics contest that’s been going on for nearly eight years now.

So yeah, when R.W. Emerson says that “a foolish consistency is the hobgoblin of little minds,” he’s aiming that crack directly at me.

You play such a chill mix of music — jazz, folk, world, country, etcetera. I love it. How do listeners react?
I’m glad you enjoy it, but at the risk of sounding even more fat-headed than I already do, one of the major reasons I continue with the show is because it’s the sort of thing I would love to listen to if anyone else was doing it. But as near as I can tell, nobody else is.

I’ve always thought my range of musical tastes is really fairly small — largely acoustic and largely instrumental; heavy on the harmony and light on the percussion; the more clarinet, banjo and tuba, the better. I’m constantly surprised that anyone other than me would choose to listen to my carefully selected slices of the musical pie.

Do listeners call in? If so, what’s one of the most interesting calls you received?
Toby the blind lady’s been a regular listener since my Saturday morning days, and one gentlemen will often call near the end of the show when I play my regular David Grisman selection so he can reminisce about the times he saw Mr. Grisman’s group in performance.

But the most interesting call came some years ago when KUCI was still located high atop Gateway Commons. The phone started ringing, but we were in the middle of one of our semi-improvised radio plays. My friend Josh wasn’t in the scene, though, so he took the phone out of the studio and answered it. After we’d finished, I asked Josh what the call had been about. He said the caller had asked, “Are you guys injecting free radicals directly into your brains?”

So I used it as a station ID for a while: “KUCI in Irvine. Injecting free radicals directly into your brain since 1969.”

What did you study when you were a student here?
I got my B.A. in Classics (Latin and Greek) in 1986 and my M.A. in the same subject in 1989. It was what they call a “terminal M.A.” since I suddenly came to realize that if I continued in the Ph.D. program, all I’d be able to do was teach Latin and Greek. And teaching — or being any sort of authority figure, for that matter — just plain makes my teeth itch.

How has the station changed since you started broadcasting?
The biggest change has been, of course, the invention of the CD.

That’s right, kiddies. Uncle Mikie began his broadcasting career back when music only came on big round slabs of pressed vinyl or on magnetic tape. The first couple years, in fact, I used to reserve the station’s production studio for two hours every Wednesday morning and record the half-hour reading for the upcoming show on these big tape reels. That way, I could edit out my various mistakes instead of doing the stuff live and just taking my chances as I do now. I’m not sure the station even has a reel-to-reel machine any more…

Of course, the CD revolution itself seems to have become “old hat” in recent years. As far as I can tell, most folks come in with their laptops or MP3 players or whatnot all set up with pre-loaded music. They then plug the machines into the massive KUCI Control Console and do their whole show in comfort and convenience. For my part, though, I’m still running around, climbing ladders, and pulling CD and vinyl records from KUCI’s various cubbyholes.

What is your own radio dial tuned to, other than KUCI, of course?
Did I mention the four part-time jobs and the narrow range of my musical tastes? These combine to leave me with not much time or inclination to listen to the radio.

Still, I find KKJZ very good for when I’m inking my webcomics and would like a little background music to distract the more judgmental parts of my brain. KPFK still has Folkscene on Sunday evenings, and Harry Shearer is on KCRW Sunday mornings. But my car radio’s been broken for about six years now, and, well, like I said, once I start doing something — driving around without a radio, for instance — I tend to just keep on doing it.

What shows do you listen to on KUCI?
Wanda and Wes always do good shows Sunday nights, but for as long as I’ve been broadcasting on KUCI, I’ve found myself to be insufficiently “hard core” to appreciate what most of my fellow DJs do. I’m pretty much of a milquetoast when you get right down to it.

How do you want to affect listeners?
To quote Pinkie Pie from the current My Little Pony cartoon show, I’m largely interested in getting folks to “smile, smile, smile.” If an unusual juxtaposition of one song against another can make a listener grin the way it makes me grin, then I feel I’ve done my duty.

You’re also a writer. Do you write to the music you play?
I can never write while listening to music. As soon as music starts playing in my general vicinity, big parts of my brain turn away from whatever else they’re doing to focus on the harmonic structures and rhythms, trying to figure out the chords and all that.

When I’m working on my comics, though, I love having music playing while I’m inking the penciled drawings. My theory is that inking calls upon a much quieter part of my brain, and the regular part just gets in the way during the process. So the music distracts it.

Of course, I don’t draw that well, so maybe it doesn’t matter that much.

What else should we know about you?
The Darkling Eclectica website is located at kuci.org/darklingeclectica, oddly enough. It has links to the list of what I’ve been playing for the past couple years as well as some of my other projects —  comics and stories and My Little Pony fanfiction, for instance. Or one could try the “Hey, Your Nose is on Fire” Industries page.

So many options! And thanks, Barbara, for making me think about all this stuff!