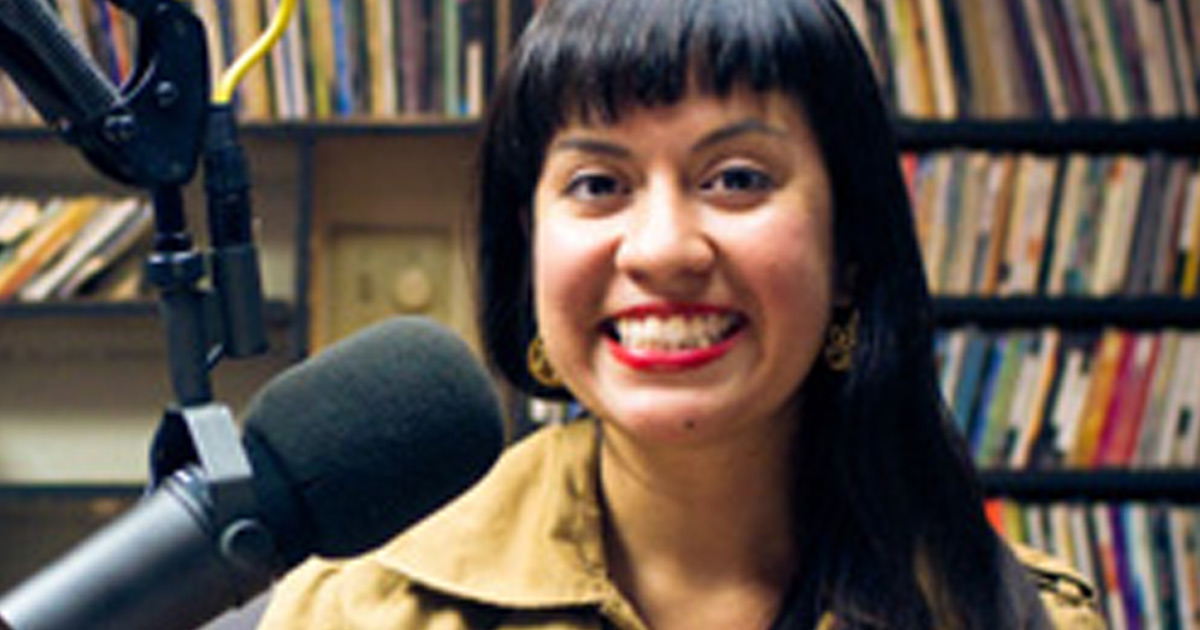 You’ve been at KUCI for a while — almost as long as me! In a very big nutshell, tell our listeners (and readers) about the shows you’ve hosted or Djed while here.

I’ve been at the station for twelve years now! I started out in the KUCI training class during my freshman year on campus in the year 2000. I was lucky enough to receive my first music show weekly Spring quarter of 2001 starting at 3am and working my way up to 4pm Sundays a few quarters after. That show, my first few years at the station, was called Channel Z (Sundays, 4pm) in which I spun a lot of music from Braid, Hey Mercedes, and The Promise Ring, to name a few. I then left KUCI to study abroad in Mexico one summer and came back with a new music show entitled zm radio (Saturdays, 4pm) which I co-hosted with Minh Nguyen. When she graduated I decided to switch it up to a more electronic (ed banger records style) music show entitled Extra Large Saturdays. Missing my indie roots I went back to doing zm radio after just a year or so of pure electro (Thursdays at 4pm). Once I started grad school (2010) I decided to make the move from music show to public affairs show and have been podcasting interviews with archivists and librarians ever since on Our Digital Future (Thursday 9:30am).

And your current show … tell us about it. You’ve hosted it for quite a while.

Yes for more than two years now; it’s gone by so fast! I started with my current show, Our Digital Future, in the Spring of 2010 and have been hosting it weekly ever since. It’s filled with interesting information about the person I talk with and what they do and how they got there. I wanted to interview people in my field of study I was entering at the time, Library Information Science/Archival Studies. I had just completed a Bachelor of Art in Film and Media Studies from UCI and was starting a Master of Science in Library Information Science with a certificate in Special Collections/Archives. I wanted to share with the community all the hidden resources available to them in libraries, museums, and archives, which, in my opinion, don’t get enough attention in our daily routines. These careers are fascinating and their stories do not get told nearly enough.

What’s your favorite aspect of doing the show?

My favorite aspect of doing the show is not knowing where the conversations will go and what will be discovered from them. It’s fascinating to hear about all the duties librarians and archivists fulfill daily in their jobs at museums libraries and archives.

The worst aspect of doing the show is running out of time when speaking with a guest who has so much valuable/interesting information to share! I may need to start inviting guests back!

I imagine you’ve come into contact with interesting people via the show. Do any in particular stand out?

Yes, besides librarians and archivists I also like to interview film- and media-related professionals. The film directors I’ve been able to interview, thanks to my press pass at LA Film Fest and AFI Film Fest, inspire such creativity. One specific director that was memorable to interview was one of the first I ever interviewed, Joshua Grannell. It was a show from the Spring quarter in 2010. He directed a fictional narrative cult film based on a killer librarian in San Francisco entitled All About Evil.

How do you come up with topics every week?
My topics are my guests. I run into guests to interview at film fests as mentioned above, conferences like ALA and SAA, professors from library school at GSLISUI, and even co-workers at the UCI Libraries. Librarians and archivists are everywhere. I ran into one one (Annette Young) front row at a Bell and Sebastian show at the Hollywood Forever Cemetery!

You’ve also volunteered quite a bit at the station. What do you currently do?

Aside from putting some of my library skills to use by re-filing vinyl, I currently volunteer playing old time radio after my show. I like the Philip Marlowe series of detective film noir genre radio dramas. These are from the early days of radio based in Los Angeles and last only 30 minutes.

You’ve seen KUCI go through numerous changes. How has the station changed since you began in 2001?

The station used to be on the other side of campus when I started here, I helped move it to its current location. The station trailers relocated from Middle Earth’s Housing complex parking lot to the Science Library parking lot. Also, there used to be a lot more on campus DJing events. Those helped me gain the experience needed to DJ art shows today!

When you’re not at the station, what stations do you listen to?

When I’m not at the station my favorite radio station is actually LA 96 Tres FM #daleh
I also enjoy listening to the Kevin and Bean morning show on KROQ. I was so excited when Psycho Mike came into our station to talk to us about life after college radio when we hosted the UCRN (University of California Radio Network) conference at our station in the Fall of 2010.

Any shows, on KUCI or otherwise, that you especially enjoy?

I especially enjoy The Sound Session Thursday night from 8-10pm. Rita has hosted this for almost as long as I’ve been at the station! Her post-punk/shoegaze tunes are very enjoyable and she’s had some great live bands come in throughout the year!

Any interesting responses from listeners?

One time a listener called in to ask the on air archivist guest advice on how to best archive their home photos. Listeners have also called into express their excitement for having such live guests as the archivist from the Pacifica Radio Archives (Jolene Beiser) on and the Archivist from the Los Angeles County Museum of Art (Jessica Gambling).

What would your listeners be surprised to learn about you?

My listeners would be surprised to learn that I am an avid cyclist as well as zebra enthusiast. Also that my favorite food is onions, and I dance with Ballet Folklorico de UCI.