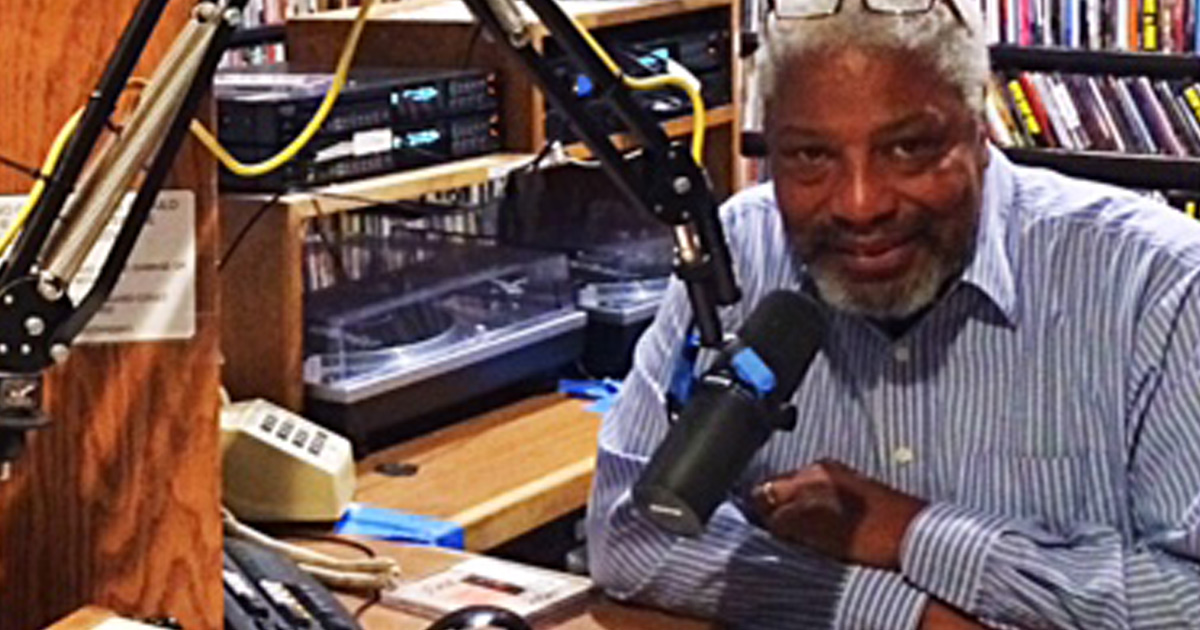 Tell us about your show.
My show is called The Crystal Egg . The title comes from a poem I anticipated writing back in the day, specifically the 1970s when I had a show by the same name on KPFT (Pacifica Radio in Houston). The original show was eclectic but mainly featured the rich crop of singer-songwriters located there and then performing live. They ranged from the blues great Lightnin’ Hopkins, to Texas artists like Lucinda Williams, Nanci Griffith, Guy Clark, Townes Van Zandt, and a 19-year-old Lyle Lovett in his first radio appearance. The poem, which came later while I was in graduate school, evoked the frozen inorganic element of a glass or quartz ovoid, and the eternal potential for untold generations of life in an egg. This lurks in my approach to radio programming. Radio is always a document and an event simultaneously and while my current show focuses on recorded music rather than live performances and skews toward jazz and jazz influenced musical genres, the principle is the same.

How long has The Crystal Egg been on the air?
I started on Saturday mornings in 2010.

How did you find your way to KUCI?
My wife, Dr. Martha Feldman, teaches at UCI. When we moved here from Ann Arbor, Michigan, in 2003, I started listening to the station. I found suburban Irvine a little sterile and generic after having lived in cities like Houston, D.C., San Francisco, and the hip village of Ann Arbor, so she suggested I volunteer here in order to find a more stimulating community.

You’re also the genre director for Jazz/Classical. What does this job entail?
I receive about 20 new releases a week on CD. I listen to everything, usually from start to finish, and make annoying notes on the packaging. I am a dinosaur, so I make a point of requesting physical product from labels and promoters so that we have in our library information about the music as well as the music. We get digital only releases and I add these if I can’t get the music any other way, but I do not trust that a digital release will be archived and retrieved by future programmers, and if they are, the serendipity of random perusal will be less likely to occur.

How much time do you spend reviewing new CDs? And you really listen; I’ve seen your write-ups! How do you find the time?
I’m not sure. I listen in the car during commutes. My commute is 25 minutes or so each way so I hear at least one CD a day in the car, often two when I run errands. Occasionally I get up early and come to the station before work to listen to others and to select music for my show. So maybe 12 hours Monday through Friday and another 10 or so over the weekend.

What is the qualification for playing jazz on KUCI? Or does any jazz qualify?
I have a credo, “Jazz is not a catalog. It’s an attitude.” I even had that made into a button. In practice that means I select music from any quote unquote genre that meets my essential criteria for jazz, authenticity, improvisatory spirit, and incorporation of the profound elements that inspired this originally African-American art form from its inception. Crucially, those elements include an awareness of suffering and the ecstasy that accompanies overcoming or reconciliation with that suffering. And it has to move me.

There is “jazzy” music that mimics stylistic and formal elements of jazz. For me, that’s not jazz and does not get on my show. There are “classical” or “folk” or “country” or “world” (what an obnoxious category), or even “spoken word” artists who connect spiritually to the messages of attention to and devotion to the soul of the species who I constantly add to the mix. Also important to me are yin and yang balance in my programming. Women artists, especially instrumentalists, are woefully underplayed on the airwaves. And I attend to the masculine and feminine aspects incorporated in compositions, arrangements, and performances when I choose what to play.

There seem to be a plethora of indie jazz labels putting out music. Is this true?
Yes. There always have been. The major labels jumped in the jazz market during the late ’50s and were gone by the ‘90s. They are represented currently by boutique labels, usually these are well known indies that they have acquired. Their impact has been both good and bad. They popularized the idiom, but a lot of artists were forced into awkward compromises. I’d say that 70% of what I receive comes from artists who self-release, sometimes with the aid of promoters, and sometimes on their own.

Any surprising new favorites?
Every week.

What shows do you listen to on KUCI?
The Mason Show. Mason scours the web for the great new jazz digital releases I miss because of my fixation with physical releases and he continually expands my horizons. Radio El Nopal, Illegal Intern Radio, Jazzy Rhythms, The Color Spectrum, Sonic Roulette, Another Time Another Place (a show spiritually akin to mine), Howdylicious, and the long running programs Darkling Eclectica and Concerts, Previews, Anniversaries. For public affairs I learn so much from Awoke and the super informative Ask a Leader, and In the Garden has helped me make better decisions around my yard. The Friday PA block, the hilarious Weekly Signals and the astute Film School are regular faves. And then there is Writers on Writing…

Tell us something about yourself that might surprise us.
I met JFK on November 11, 1963, eleven days before ….
He had just returned from Arlington National Cemetery where he laid a wreath on the tomb of the Unknown Soldier for Veteran’s Day. Sadly, he was soon to be laid to rest there within weeks.

Two books everyone should read.
Triumph of the Sparrow: Zen Poems of Shinkichi Takahashi
Born in Slavery: Slave Narratives from the Federal Writers’ Project,1936 to 1938