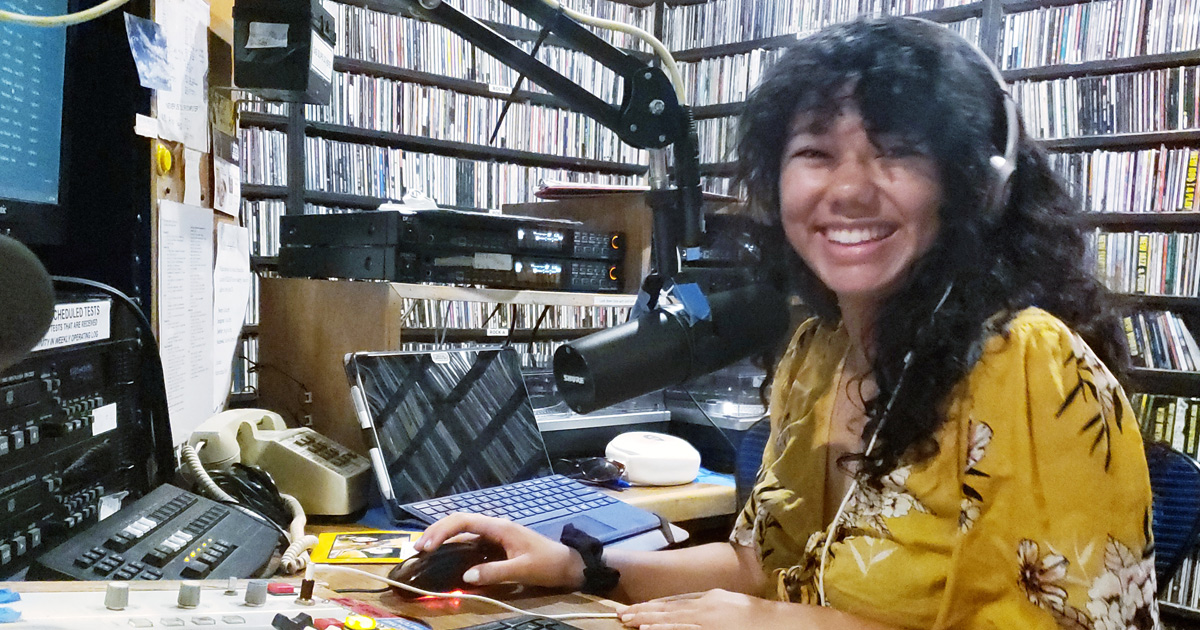 Tell our readers about your show.
Gloss is about exploring the intersection between films, their scores, and underground music. Each episode is based around a film or, sometimes, a director. I’ve covered films like Pulp Fiction and AKIRA, while on other weeks, I have more broadly themed the show around David Lynch or Stanley Kubrick. I spend a lot of time organizing the playlists in a way that flow similarly to how the film flows. I play several songs from the soundtracks of the films, but also include other tracks that might be related to the theme of the film or plot.

How did the title of your show come about?
Well, I don’t actually remember how I came up with it. I know I was playing around with a lot of one word titles, but the secondary definition of the word “gloss” in the dictionary is what sold me: “a translation, explanation, or interpretation.” I tend to add my own two cents about the film itself so the title seemed perfect.

How did you find your way to KUCI?
Winter Boothing! My freshman year I was living in the Campus Village apartments so there weren’t as many social opportunities, leading me to the ring road booths. There I met a few of the directors and DJs who told me about the training class, which was conveniently located right next to that old apartment!

How does your playlist come together?
I usually pick a film I want to talk about, scour the web for its soundtrack, and use that as my basis. Although I tend to be a big fan of the movies I cover, I still use their online summaries to guide me through the plot so I can add tracks that relate to that specific part of the film. I love being creative and adding new tracks that you might have never thought of being related to the movie, like when I played Cowgirl Clue’s “Game Over” during my Coraline episode.

Artists and recording companies send KUCI so many CDs. How do you choose to play the cuts that you play?
I love our growing collection of CDs, digital music, and vinyls! If there’s a new album I’m itching to play that we have in the studio, I sometimes work backwards and look for a movie that I could relate to it. Interesting subject matter and creative instrumentation is always a plus when listening to our new adds.

Any formerly obscure artists that have been a major surprise or find?
Definitely. I’ve become obsessed with a lot of artists found through KUCI, like Kadhja Bonet, Buscabulla, and French Vanilla!

You’re also program director of the station. What does your job entail?
My job includes creating a quarterly schedule for all music shows based on DJs’ availability and hours, among other criteria; listening to new trainees’ demo tapes and including them in the schedule; keeping track of planned and emergency subs; and helping with general programming dilemmas/projects the management team might run into.

Best part of your job?
Getting to meet and interact with all of KUCI staff, old and new, is the best! I’m also a nerd about organizing info so having a million Excel files about KUCI stuff is fun for me.

Worst?
Worst parts are: 1. Getting calls in the middle of night for no-shows and 2. Worrying that I won’t hear my phone in the middle of the night for those calls! I’m a light sleeper but still get anxious about not hearing my phone ring for some reason.

What do you listen to on KUCI for pleasure?
Some current shows I always tune into are Sonic Roulette, Theriosity, Indie Gladiator, Mellow Moves, Belly of the Beat, A Contrast in Semantics, The Vault, The Graveyard, but the list goes on and on!

How do you feel about Spotify, Pandora, and other internet music venues?
These big streaming sites have revolutionized the music industry from both a production and consumption standpoint, but while it is great that we can easily access and discover so many great artists with the click of a button, their fine print reminds us that we should not be broadcasting the music they get paid to play on our airwaves. This shouldn’t be discouraging to us though, regardless if it’s “fair” or not. There is value in exploring less familiar/less easy territory with CDs, vinyl, cassettes, live sessions, etc, instead of just hitting “play” on a playlist and leaving the studio. In short, I have a love-hate relationship with them, but I think KUCI can live a fulfilling life without them!

Book you wish everyone would read?
Cat’s Cradle by Kurt Vonnegut

Band you wish everyone knew about?
Can’t pick just one: KNOWER, Death Grips, and SOPHIE (and the ones I mentioned earlier!)

What do you see as the future of radio?
This new wave of young people being interested in creating for, and cultivating their own music scene, is really encouraging for college radio, specifically. We have a unique opportunity to put a face (or voice) to the suggestions and playlists that automated programs on streaming sites do for us. It’s a cool feature, but it’s not the same as having a personal music recommendation from a DJ who’s sharing their music for the sole reason of loving it.