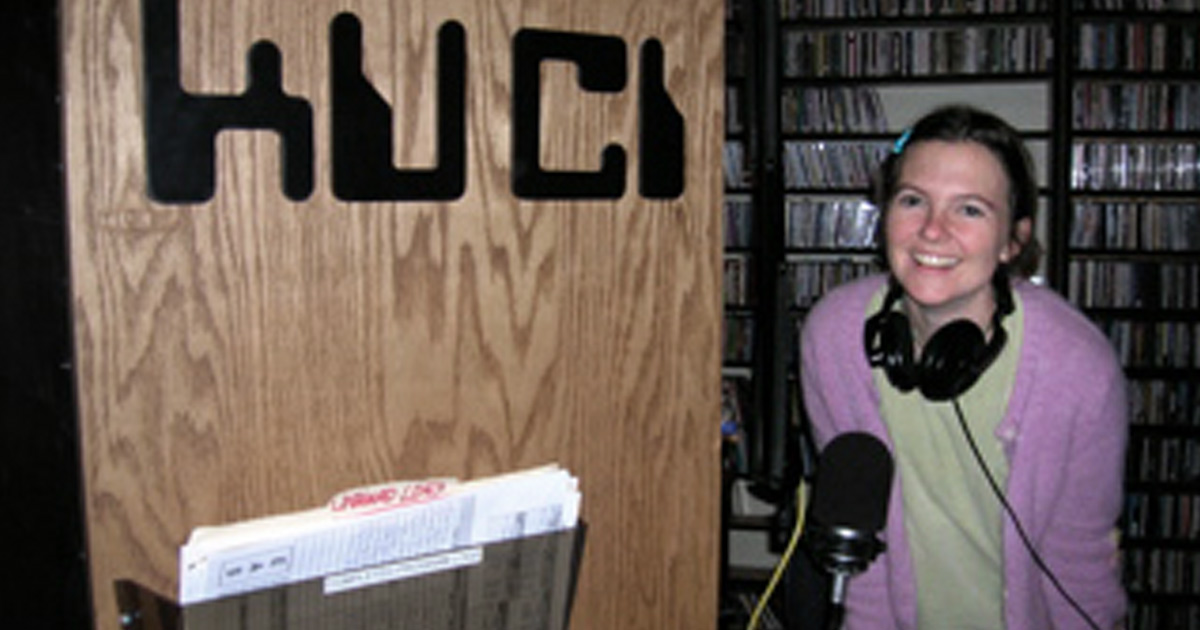 A few months ago I wrote a “Spotlight” on James Rawson. I became familiar with his show, mostly because as I would drive home after hosting “Writers on Writing” on Thursday evenings, I kept the dial on KUCI. I found the music he played so compelling that I changed the station only when I was out of range of KUCI’s signal.

Likewise, Branden Willman’s show, “Hootenanny,” is before mine and so I have had the good fortune of listening on the way to the stations on Thursdays. She plays artists like Tom Waits, Leadbelly, Patty Griffin and Leo Kotke, to name just a few of the greats.

BDB: First, tell me about your interesting name. I don’t think I’ve ever met a woman named Branden, or seen the name spelled like this.

BW: It’s funny how often people ask me about my name. I remember as a child my mom telling me that she was reading an historical romance novel while she was pregnant with me and the main female character’s name was Branden (with an e) and that is where my name came from. I recently asked her about the title of the book so that I could read it myself. She kind of giggled and told me she had no idea what I was talking about, that she and my dad had named me Branden because they liked it, no other reason. No book. No Scarlet O’Branden. Nothin’. They just liked it. I think I made the whole story up in my mind.

BDB: How did you come to have a show at KUCI?

BW: Throughout my life I have been very interested in music and making collages from songs. My favorite gift to give a friend is a mixed CD that conveys some kind of message or theme that is meant for that person. I guess that is why I was interested in becoming a DJ. It is a chance to sit down, once a week, and listen to music and share the songs that I enjoy with anyone who is willing to listen.

BDB: Your music is an interesting mix of folk, blues, Cajun, etc. Have you always like this sort of music?

BW: I have always been interested in folk and traditional country. The first songs I remember learning as a child were Peter, Paul, & Mary, Hank Williams… stuff my grandfather would sing. When I was in middle school I started learning to play guitar and found myself drawn to songs that incorporated interesting harmonies with lyrics that had something important to say to the listener… a story, or something political… stuff like the Indigo Girls, Bob Dylan, Tracy Chapman, and Shawn Colvin. In college, and after I graduated, I began living in different parts of the country, traveling outside of the USA, always with my guitar, meeting and playing music with people whose backgrounds were in different styles of music. It was at this point that I began to really appreciate other styles of music such as blues, jazz, traditional Appalachian, bluegrass, Latin, Celtic, Afro-Cuban. I enjoyed when musicians found ways to fuse these genres, to make sounds that are creative and not easily classified. I guess that is why my show on KUCI is a little bit of a hodgepodge.

BDB: Do you have a favorite artist, or artists?

BDB: How do you find the music that you play?

BW: Mostly through word of mouth. Most of my friends are interested in similar styles of music that I am in to. We exchange music, go to live shows.

BDB: Favorite places to go out to listen?

BW: Festivals, hands down. I love music festivals! I just don’t think you can beat a weekend where your only objective is to listen to great musician after great musician, then oops that one is over, and here comes another great musician! Then, at night when the “professionals” have stopped playing on the stage, going and playing with and listening to “ordinary folk” around the campfire while looking up at the stars.

BDB: What do you hear from listeners about your show?

BW: People tell me they enjoy it. There are not too many opportunities to hear the stuff I play in Southern California. You really have to go online to public radio stations in other parts of the country that focus their entire programming schedule on folk to hear most of the music that I play.

BW: I work part time at UCI. I am also the cofounder of a nonprofit called the Grain Project www.grainproject.org that is working to establish farmers’ markets and community gardens in areas of Orange County such as Santa Ana and La Habra. I also enjoy spending time writing songs and playing guitar, yoga, getting messy in the garden, painting, building stuff… I’m a potter.

BDB: Anything else listeners should know about you?

BW: My husband and I will be moving to Berkeley in the summer, so if you want to listen to the Hootenanny, now’s your chance!

Barbara DeMarco-Barrett is host of “Writers on Writing,” Thursdays at 5 p.m. and is author of Pen on Fire (Harcourt, 2004). www.penonfire.com